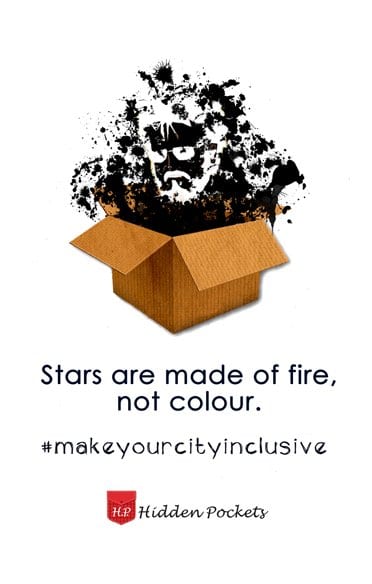 “But you are fair! Are you really from Chennai?”

Frustrated by people’s problems with anyone and everyone, for either being fair or dark skinned, tall or short, thin or fat, straight or gay, young or old or actually being anything for that matter, I said let’s start our campaign, #makeyourcityinclusive on a powerful note.

What can be more powerful than the face of the man in this poster? Super Star Rajinikanth is probably the best icon that represents everything inclusive, after defying everything that is stereotypical. From his skin colour and his education to his language and roots, the list is endless. Ask any of his ardent fans and they’d probably give you a longer list of things that he has defied! Getting a fairness cream to sponsor his movie was the biggest insult to him and all that he represents. This is our ode to a man who has defied all that.

The answer to the question, which city do we start with, seemed rather obvious. Chennai! With Hidden Pockets being mostly based out of Delhi and with a few of us in Bangalore, it seemed absolutely necessary to start our campaign in a city that is in the other end of the country.  It is a campaign about being inclusive after all.

But that’s not all. After having a love and mostly hate relationship with Chennai for over twenty-five years, I realized that I don’t know so much about this city where I grew up. My experiences in Chennai have been limited by the areas that I frequented. I blame it on my limited experience with the city even through twenty years. But this began to change about nine months ago, during the Chennai floods. I was in Chennai, stuck and struggling to get to safety with my uncle who is physically disabled. The drama that unfolded and the help that found us is a complete miracle. What could be more inclusive than all that help that people gave each other going beyond their usual inhibitions?

But isn’t there more to Chennai than just saving people only during a flood? Wouldn’t you want the world to know about it? Are you from Chennai? Have a story to tell us about Chennai that hasn’t been told before? What are those hidden pockets in Chennai that people don’t know about? Or do you have places and people that you’d like others to visit and become a part of? Tell us here –

Follow the hashtag #makeyourcityinclusive for other updates on our campaign. Coming soon to other cities too!

#makeyourcityinclusive is Hidden Pockets’ campaign on making all cities inclusive, making everyone more inclusive. Tell us about all the places in your city that are disabled-friendly, open to single women even late at night, safe for senior citizens or not homophobic. How do we talk openly about mental health? Is your city inclusive to all them and more? Tell us by filling this form: