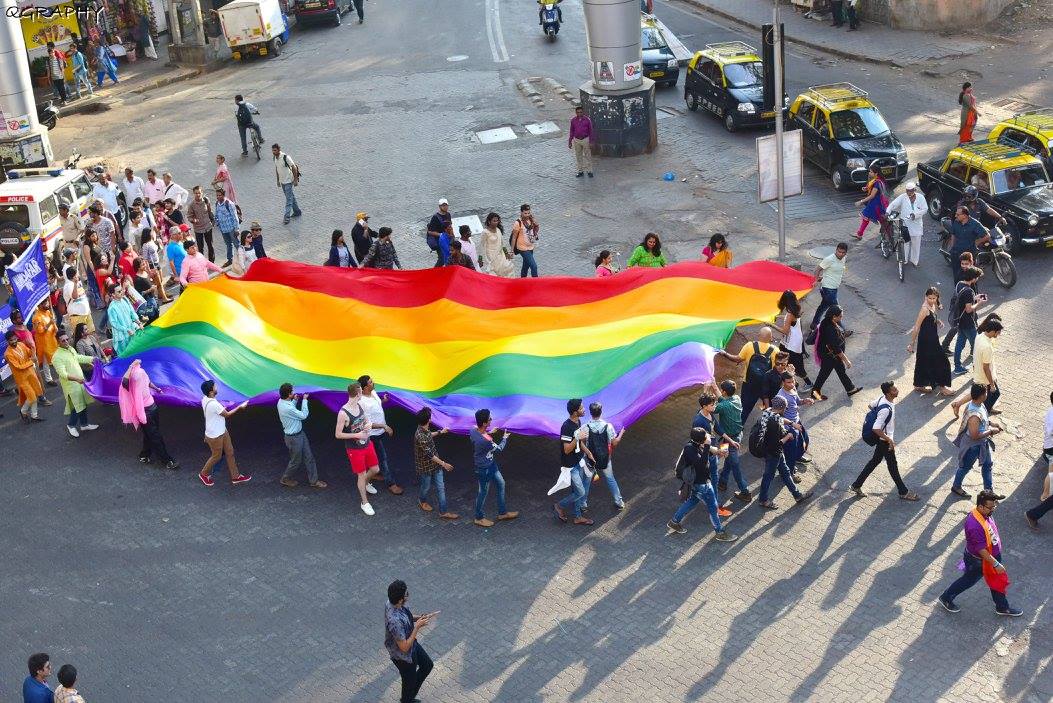 “We don’t encourage sex at work. We actively discourage it but the moment we say LGBT, people’s heads goes to the bedroom.” – Ritesh Rajani, IBM Diversity Engagement Partner, IBM Asia

Members from the LGBT (Lesbian, Gay, Bisexual, Transgender) community delivered the keynote address of the symposium. They shared their experiences as people coming from different walks of life and different parts of the world. The keynote address began with Michiel Kolman, Sr. Vice President, Academic Relations – Elsevier & President International Publishers Association. Apart from sharing his journey as an LGBT inclusion advocate in his workplace, he also shared the initiatives of his organisation for LGBT inclusion. In his address, Kolman also explained the different prevailing models of engagement among multinational organisations with respect to LGBT inclusion in workplaces. This included the ‘When in Rome’ model, the Embassy model and the Advocate model. Companies following the ‘When in Rome’ model, adhere to “the norms and local laws of the land but allow employees to opt out of placement” in a particular location whereas companies following the Embassy model “enforce pro-LGBT policies in the workplace but do not seek to effect changes outside their walls.” Apart from pro-LGBT policies, companies adhering to the Advocacy model seek to actively change the cultural attitudes of people outside the workplace.

While Kolman said that Elseiver adheres to the Embassy model with active pro-LGBT policies, Parmesh Shahani, Founder & Head of Godrej Culture Labs and the next key note speaker declared his employer, Godrej, as a company that follows the Advocacy model. Subsequently, Shahani shared Godrej’s policies and approach to making the company inclusive. He shared three key points to being a company that follows the Advocacy model namely: adoption of LGBT friendly policies by the company, a culture of inclusion in the workspace and sponsorship of inclusive events and activities (in Shahani’s words – “put your money where your mouth is”).

A keynote by Jaya Seelan, a transgender woman** and General Manager at Sahodaran (a non-profit organisation working for transgender rights) followed Kolman and Shahani’s talks. She outlined her journey as a transgender woman and her work and growth with Sahodaran as a transgender individual. A panel discussion that included Poongkhulali Balasubramanian, a lawyer; Lavanya Narayan, a journalist; Sunil Menon, social activist and fashion choreographer and Ritesh Rajani, IBM Diversity Engagment Partner, IBM Asia, followed the keynote address.

This session emphasised on the need for different workplaces to understand the ambit of Section 377. Poongkhulali Balasubramanian explained the scope of Section 377 of the Indian Penal Code for the understanding of the audience. While Section 377 is assumed to criminalise identification of any individual as being homosexual, the section, in actuality, criminalises carnal intercourse (anal or oral sex). Essentially, this means that Section 377 may be used to penalize anyone involved in ‘carnal intercourse’. This could include both heterosexual and homosexual couples. Lavanya Narayan shared the issues faced by the present generation with respect to being LGBT. This included the issue of parents worrying about their LGBT children getting married and their questions regarding their children’s certainty about being LGBT. Sunil Menon shared about the shifts in attitude that he has seen over the years among the public at large towards the LGBT community.

Ritesh Rajani, IBM Diversity Engagement Partner, IBM Asia took the conversation around inclusion a step further by talking about the intersectionality that exists between different groups like LGBT and persons with disability, among others. He emphasized the need for workspaces and companies to become inclusive of all these different marginalized groups.

The second half of the day had four different breakout sessions on different topics to understand different issues and dimensions of LGBT inclusion and workplace dynamics. This included Defining the Indian LGBT Business Case and beyond, The Positive Effect of LGBT Employee Networks, Straight Allies – The Key to LGBT Acceptance and Executive Leadership & LGBT Workplace Inclusion. Participants were required to choose one of the four sessions to be a part of, engage and discuss the issues related to that topic. While the symposium at large and its sessions were designed to make workplaces more LGBT inclusive, there seemed to be a certain need for inclusion within the LGBT community.

Where’s the L (and bisexual women) in the LGBT?

“If transgender is the third gender then who is the first and second gender? Who goes first, man or woman?” – anonymous participant, LGBT Workplace Symposium

Beginning with the keynote, there were far and few women* speakers in the symposium. Interestingly, though there were a few images of women in the pro-LGBT initiatives by Elseiver in Kolman’s keynote presentation, there was no specific mention about lesbian or bisexual women nor was their involvement in the company’s activities mentioned during his presentation. However, Shahani during his presentation mentioned about Radhika Piramal, the present MD of VIP industries, coming out as being a lesbian during her days at Godrej. This happened to be the only mention about a lesbian woman or even a woman in the keynote presentations made in the symposium. It makes one wonder if the supposedly inclusive spaces are in fact inclusive at all. Or could it be something more deep-rooted going beyond organisations?

It is worth noting that there was no woman speaker in the keynote session. Interestingly, there were only two women speakers in the first half of the day and one speaker openly identified herself as being queer. That said, the breakout sessions had three women participating as panelists and representatives of different corporate organisations. Why were women so under-represented especially from the LGBT community? Answering Hidden Pockets’ question on the lack of representation of lesbian and bisexual women, Shubha Chacko, Executive Director and Founder of Solidarity Foundation said, “It isn’t due to a lack of effort from our end.” She admitted to speakers – two women and a transman – backing out of the symposium at the last minute. Though the women were told that disclosure of their sexual orientation wasn’t necessary, they still seemed worried and uncomfortable and eventually backed out:

“It is hard for lesbian women to come out because whatever it is, when it is a gay man there is at least the advantage of gender. Gay men face a disadvantage because of their sexual orientation but there is a definite advantage because of their gender. So if you are a lesbian woman, you are battling two things – the fact that you are a woman and the fact that you are a lesbian, so the difficulty is so much more to come out (and talk about their sexual orientation).” – Shubha Chacko, Executive Director, Solidarity Foundation.

David Pollard, Executive Director of Workplace Pride Foundation also admitted to the challenge that they face with respect to the inclusion and involvement of women in all the activities conducted by their different member companies and even within Workplace Pride:

“Women have a double glass ceiling. They are lesbian and woman. It makes it that much more difficult.” – David Pollard, Executive Director, Workplace Pride Foundation

Pollard also admitted to having been called out before on the same issue. Now the Foundation has made a commitment to have equal number of women as speakers in their different conferences:

“To be honest with you, we’ve been called out on it before. It is easy to continue the way you are. But we have learnt that we have to reach out and bring them (women) in by explaining things to them.” – David Pollard, Executive Director, Workplace Pride Foundation.

“Feminine stereotype is something that is craved within a largely male run institutional hierarchy because women are considered to be the ‘break’ that you can look at. If a pretty girl is part of your team then she is someone you can go and flirt with. And large corporates think that is something that is accepted. So when someone refuses to fit into that particular stereotype and if she has the misfortune of not being accepted as a tomboy or as one of the guys; she faces discrimination on two folds and the marginalization is double.”

While men are discriminated for not fitting the masculine stereotype, Singh added that women who do not fit into the feminine stereotype are often discriminated far worse than men. Other challenges faced by both women and transmen, were shared by activists working for LGBT inclusion during the different breakout sessions. This included the need for transmen*** to identify themselves as women; to be able to use the restroom; the usage of given name vs. the name of their choice; lesbian women using the restroom being seen as a way to ogle at women; and being ostracized for coming out as being lesbian, among others. With women facing these challenges in workplaces: how inclusive is the LGBT community of women?

We have also captured some of the inclusive steps taken by the industry, that we were discussed during the conference. hear it here:

*Editor’s note: Women in this story refer to cisgender women who are lesbian, bisexual and queer. Cisgender women are women whose gender identity matches the sex that they were assigned at birth.

** Transgender woman is a woman who was assigned male at birth but whose gender identity is that of a woman.

*** Transman is a man who was assigned female at birth but whose gender identity is that of a man.