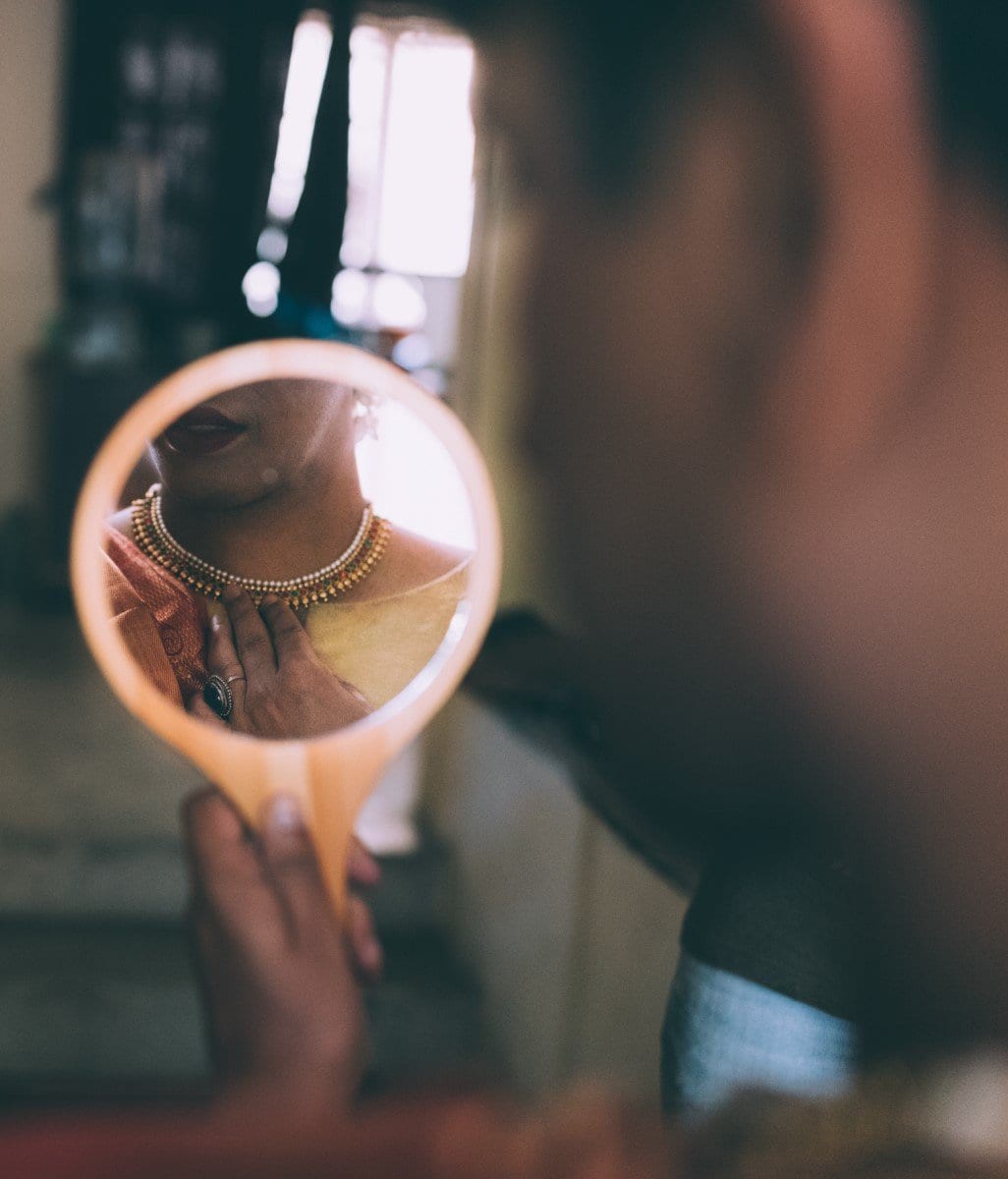 When I had created Mayamma, I wondered whether she should be married or not. I had created the background story of how she came from Kuttanad to her boyfriend Anand. But, the story couldn’t continue for a reason. The brilliant reason was to help her marry her long time boyfriend. This would help me give more stories about Mayamma for her future performances. The letter below is one that she writes to her friend Sreeja back home telling her about how she got married to Anand Raja of Pudukottai.

Hope you are doing well! I am doing well. In fact, I’m doing great. I have some news for you. I got married! Yes, it happened and I had to tell you about it. All I could see was the rain drops pitter patter on the train window. I don’t know whether the sky was happy or sad when I was leaving Kuttanad. My heart had sunken after what I did to my parents. But, what can I do after they out rightly rejected the love of my life.

You may be wondering what I have done to my parents. I had to hit my Appa because he was beating my Amma for not raising me right. I beat him with the coconut branch till he bled and became unconscious. Seeing this, my Amma asked me to leave immediately. She gave me few thousand rupees and told me to go to my boyfriend, Anand Raja.

I know I did a mistake and I deeply regretted what I had done. They were the only family I had. The only people who supported me to be a performer and to be well educated woman. But, the support for my love towards a man from Bangalore, they weren’t ready to accept him. All because he wasn’t a Malayalee and belonged to royal family of Pudukottai. All I wanted to do was meet the love of my life.

I reached Bangalore Cantonment Station and went straight to Anand’s house in Benson Town. By the time, I reached his home. I found out that his family was against our marriage. The reason for the disagreement was because I am not from a royal family. They have told him that they will disown him if he gets married to me. I was upset and furious after hearing this. All he told me was that I have to be calm and he will figure something out. Next day, I woke up and he told me that he found a way. He gave me a red expensive saree, a necklace, a couple of pearl bangles. I stood there clueless. I asked him, “What does it mean?” He said, we are eloping and have to end this madness of caste and ethnicity. He told me that he will stand by whatever decision I take and hopes that I support him as well.

But, I was confused and wondered, “What about religion?”

He said that we will work around that in the future. All, we had to do was exchange garlands and go to the registrar’s office to sign to be married. I had to think about it. Marriage is a big decision in my life. I thought I lost everything and I come to Bangalore to find the love of my life who is ready to accept me the way I am. This would mean that I can start a new chapter of my life. I can pursue my dream of being a performer and Anand would stand by me through whatever decision I take. I said, yes! He called his friends to help us with getting married. Of course, a wedding is never complete without few pictures. Here are some for you. Wish you had been there! It all happened so suddenly. But, we will come and meet you soon. 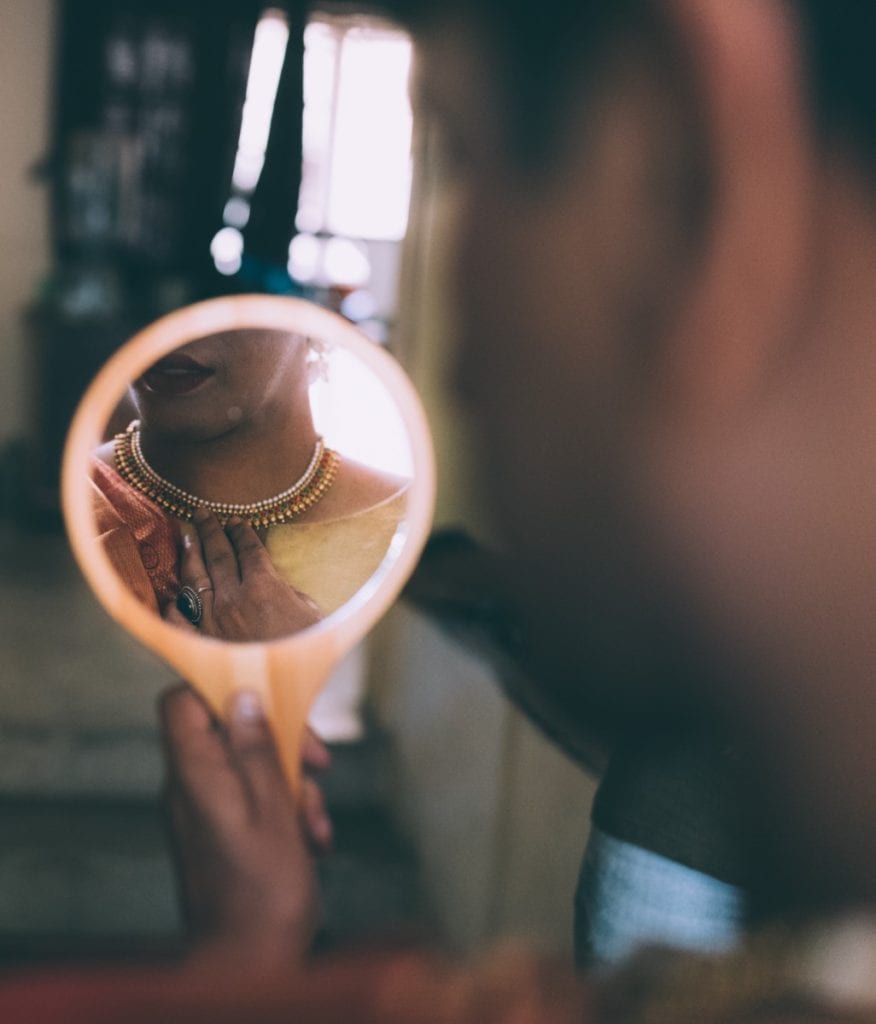 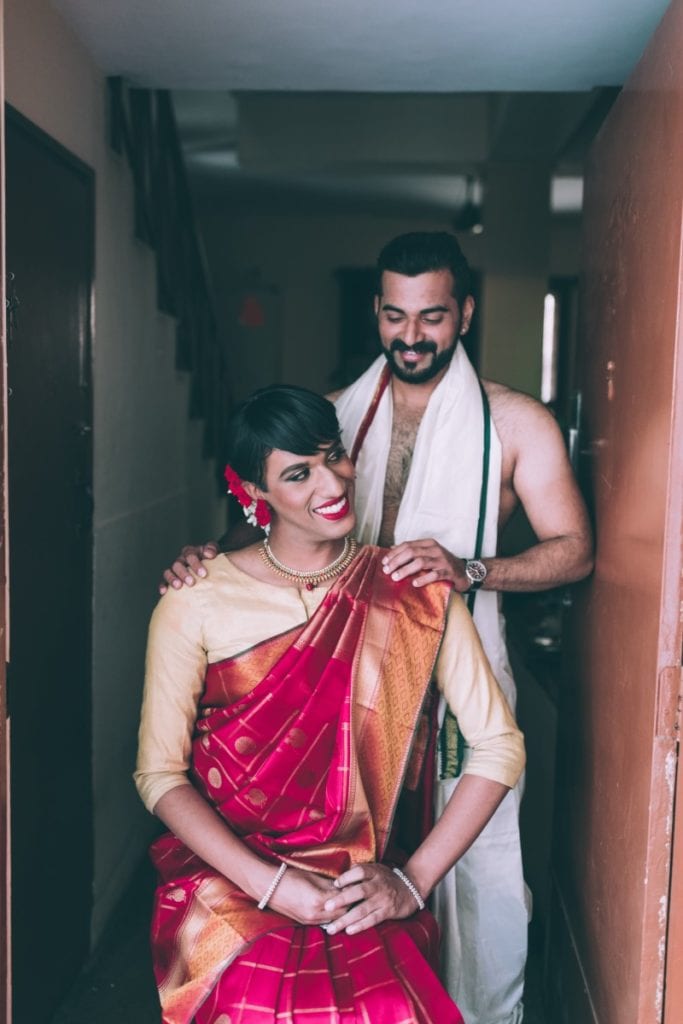 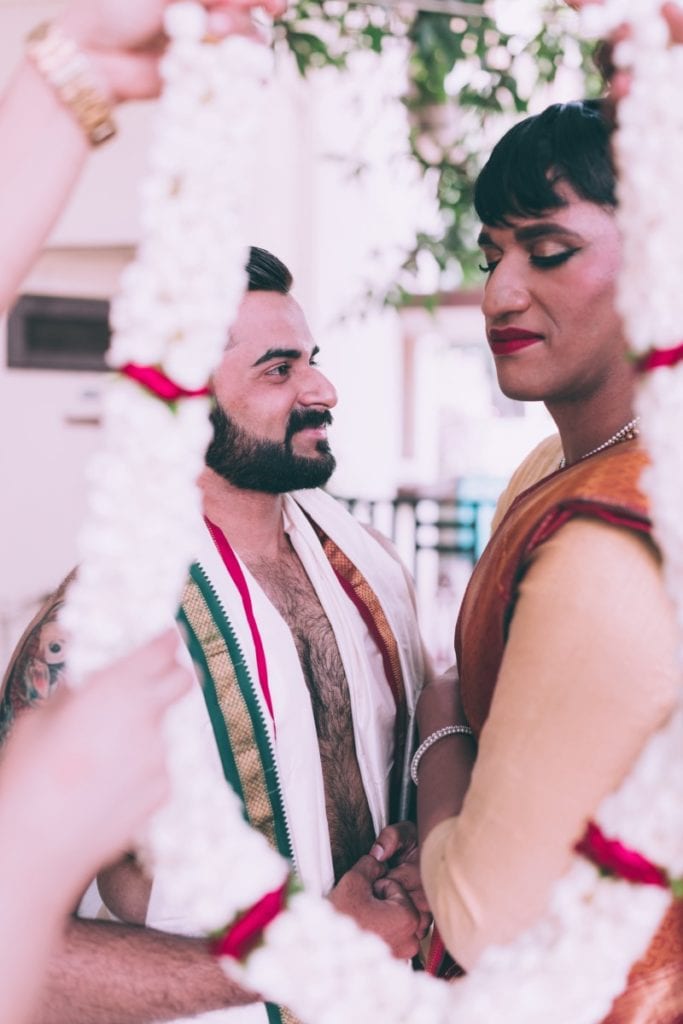 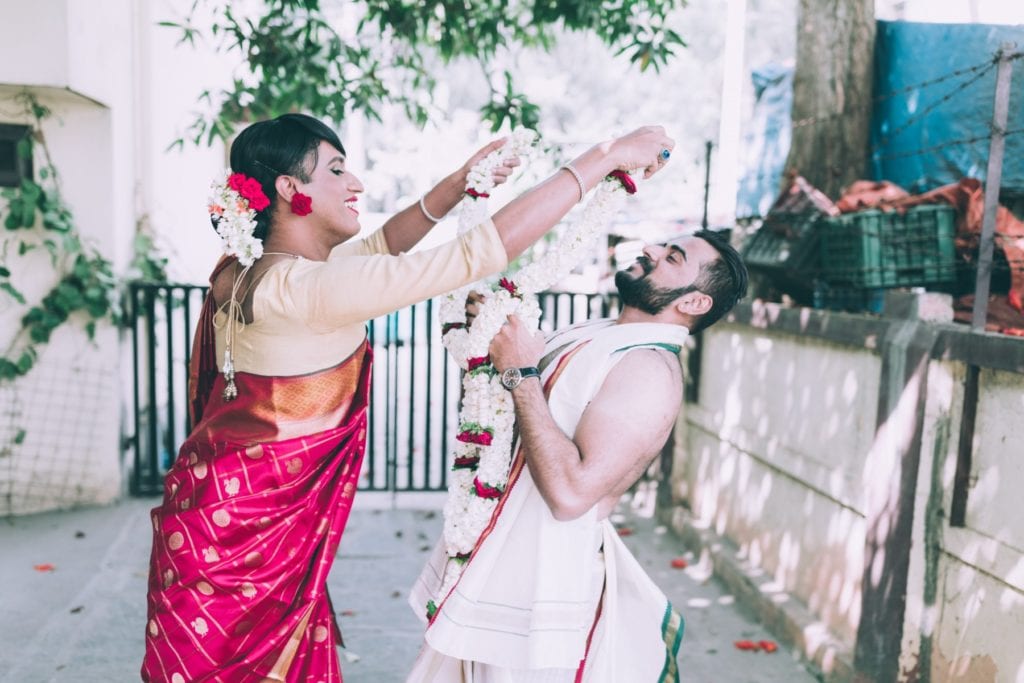 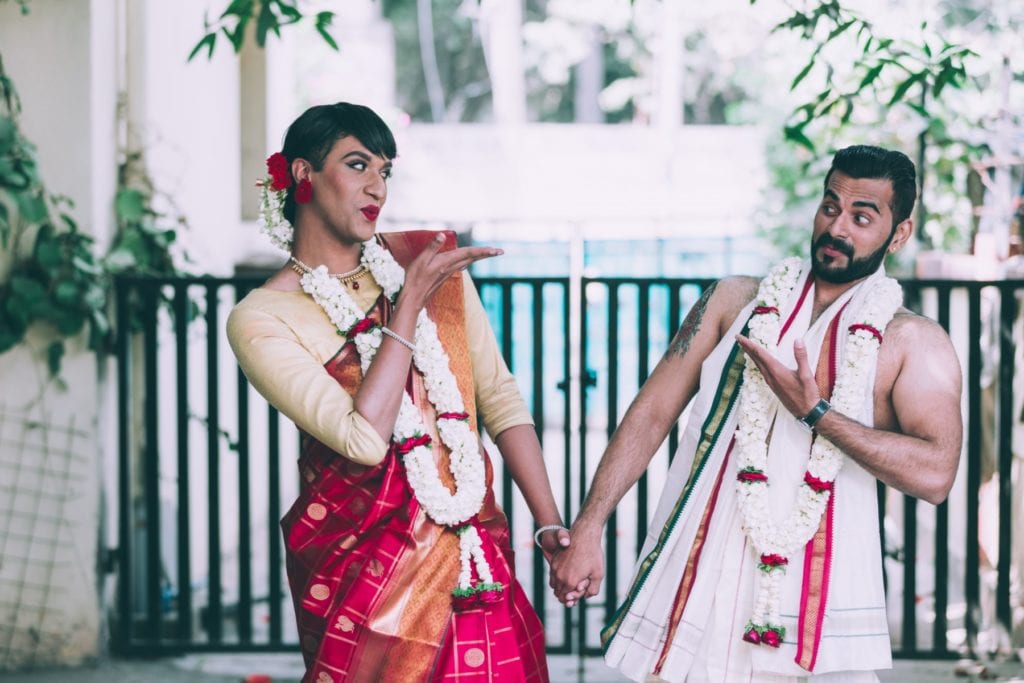 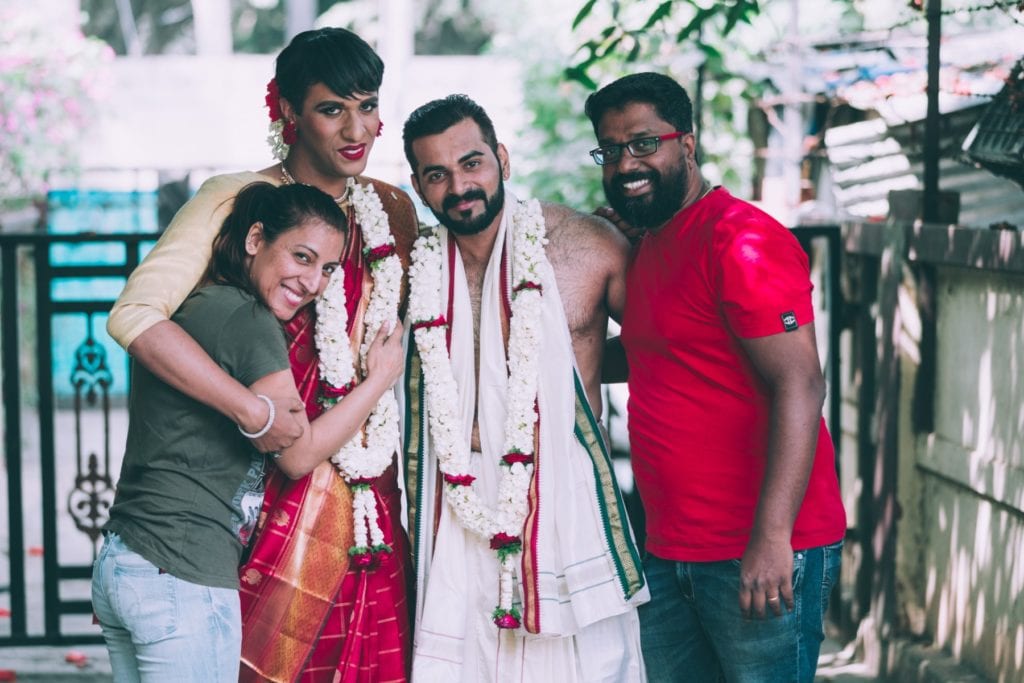 Now if you are wondering why I got my drag persona Mayamma married, I’ll tell you about that next week.

My gratitude list:
Thank you, Saina Jayapal for connecting me to Pritham Denzil D’Souza. You have helped me from the planning of the photo shoot till the end. I owe you a lot. Nithin Iyer, who modelled to be Maya’s husband known as Anand Raja, Thank you for posing as Maya’s husband in this homophobic world, not many straight men would have done what you have done. Romal Laisram, who came to the rescue to style Nithin when none of us had a clue how to do it. Thanks for helping us out even though you had a rushed morning. Pritham has clicked the brilliant pictures for this photo shoot and who conceptualized the whole shoot. You should be one of the amazing photographers in India. It was pleasure working with you. Rachna Handa is a brilliant makeup artist and stylist who was able to turn me from a man into a beautiful woman. Your skills should be insured and people should reach out to work with you. I am so grateful to Prithvi Chandavarkar who helped us with the location for photo shoot. I had only your house in mind, when it came to Maya’s wedding shoot. Ritheesh who helped Pritham in clicking pictures, you are a sweet guy and thank you so much for giving huge support. Thank you so much Ally Matthan of The Registry of Sarees for giving me the beautiful red saree and helping me with the styling. I still can’t believe that I wore that saree and it’s amazing. Last, but not least, Nero who happily posed with us and gave us good company.

Author Profile:
Alex Mathew a performer, famously known as Maya, the drag queen. He focuses on bringing about issues related to individualism, feminism and gender equality under the spotlight. Apart from that, he loves to entertain people in his spare time.