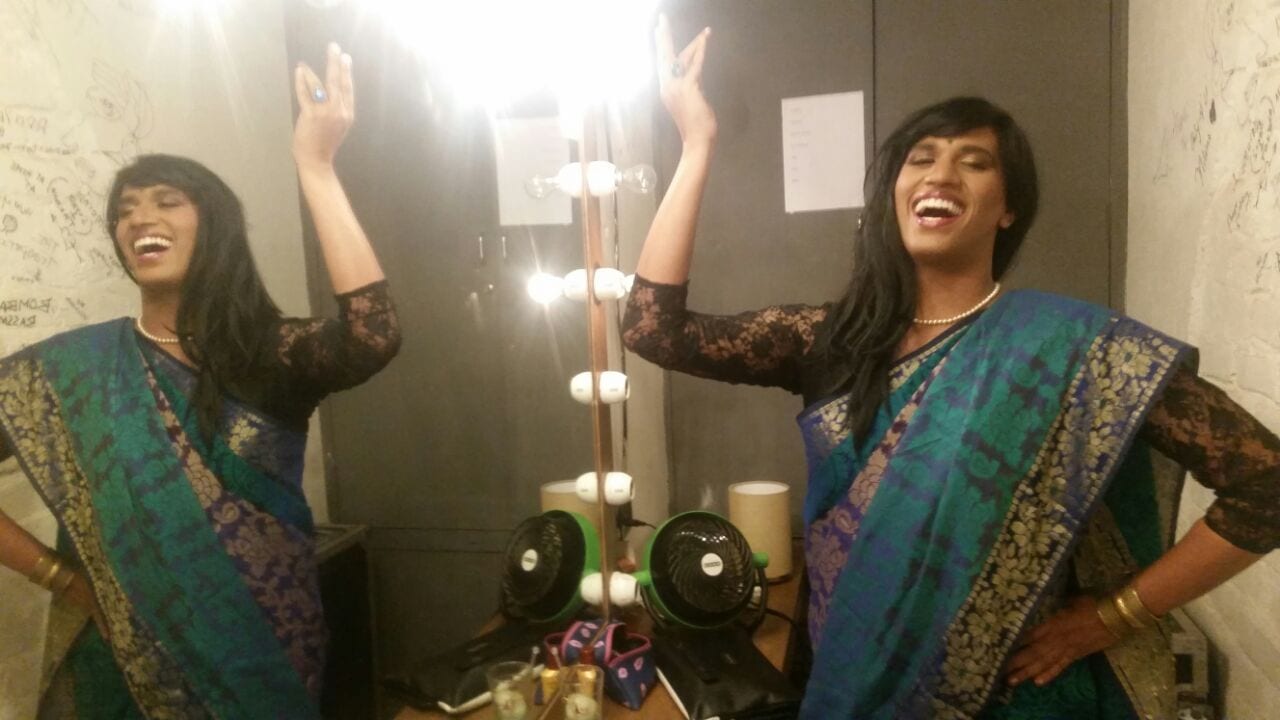 The song may seem pointless to you because you don’t know the language or what it means. But, this folk song is where Mayamma started her journey.

Two years back, I was busy with theatre performances and singing in karaoke pubs. But, I didn’t feel the exhilaration as a performer. I was missing that adrenaline rush after each performance.

At that point in my life, I got rejected in every theatre audition, simply because I didn’t have a crisp diction while speaking English. I was put aside as the ‘Boy with the singing voice’. I have been told always that I was a bit effeminate and I felt down whenever I heard it. I decided to utilize my feminine side to communicate a story and there was a beauty to it.  So I chose to be a Malayalee drag character because of my Malayalee accent and the supposed effeminate demaneour. It was effortless to get into the character by just observing the women in my family.The excitement of turning into woman and playing that character gave me that adrenaline rush that I required.  But, Mayamma gave me the leverage to use my supposedly weakness into strength. That was more important to me than hearing all the negativity in my life.

Mayamma is a native Malayali woman from Kuttanad, Kerala. She has a mother and an alcoholic father. I chose a very intense story line because I had watched abusive husbands or fathers in many families that I came across. Patriarchy is so idiotic that even abuses are to be silently taken and not voiced out. Telling a story that people could relate to is what I wanted. I had to choose an alcoholic father because it’s what I saw mostly when in Kerala.

I started to build the story around Kuttanad. I wanted to convey that I am a simple village girl with big city dreams. However, she stood for issues concerning individualism, feminism and gender equality. It may sound like hard-hitting words, but that’s what this society needs right now. When I made this story, I wasn’t sure how the story would be convincing. But, it was brilliant risk that I would take and it would work in my favour. I had a story to tell, yes but what kind of person would Mayamma be?

I decided to use particular personality traits from my Amma because my Amma is a superwoman even when my father isn’t around. She is strong even if there are forces around her, trying to put her down. I decided to include her traits of being bold, outspoken, being a go-getter and above all, the humility that makes her so down to earth.

I had to make sure that the character that I make should have all the qualities of my Amma and how she would be a superwoman. I decided that she would always wear sari and she would also be elegant like my mother. She becomes a village woman when she arrives in the city and the city changes her for the better. But she is always a nadan penne (native woman) at heart

That’s why I love singing the song “Appangal” because I don’t lose the true Malayalee beauty that I have in me. It will always be there and my soul will never change. It’s built to sustain storms and other calamities. Nadan penne who loves to make Appams for everyone!