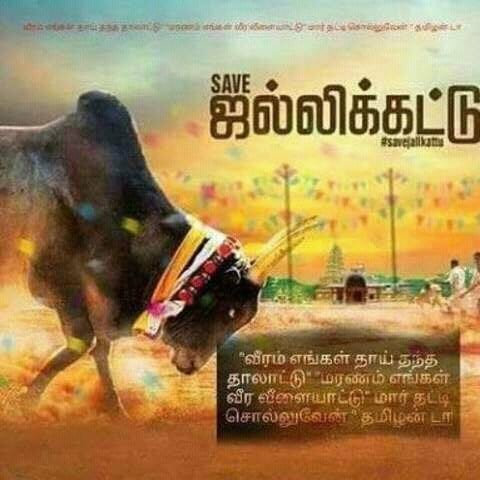 Who am I? I am a Tamizh woman. I was born in the capital city of Chennai and I spent 20 years of my life there. I am characterised by that typical Tamizh Pride that India knows too well and, like every other one of my fellow Tamizhs, I hold my language and culture in the utmost regard, wear my identity on my sleeve and do not hesitate to school anyone who dares to pronounce ‘Dosai’ or other references that are stereotypically associated with Tamizh culture, incorrectly. It has been endearing to witness youth in Tamizh Nadu, lead the movement and claim the shores of Marina in peaceful and organised protest; It was elevating to see youth categorically refuse to accommodate film stars or politicians lest they dilute the debate with their side agendas; It was heartening to see the shared accountability of the protestors as they tirelessly clean up public space even as some others retire due to physical and mental fatigue. Despite the violence that ensued on the 23rd of January, we must sustain the momentum of our solidarity. There is much to take away from the movement against the ban of Jallikattu: but there is as much to interrogate, as much to transform and so much more to be brought into similar, if not more critical focus.

In the last couple of weeks, our own articulation of our identity politics has been reduced to a dismal state of impoverishment. Granted, there is a trickle of emergent discourse that has efficiently utilised this opportunistic moment to both: critically reflect on the practice of ‘Jallikattu’ as well as deepen the imaginary of “Tamizh” identity: subtle but deliberate efforts to subvert an increasingly monolithic rendering of Tamizh culture, in an effort to widen, even diversify, the floodgates of Tamizh compassion. However, the dominant discourse of dissent seems to be in diametric opposition to this trend. For instance, in the past week, there has been a selective privileging of issues that were raised against the sport. As a result, one now finds – scattered across the interwebs – numerous counter-arguments that go out of their way to clarify our love for the native breed, our staunch compliance with the safety regulations mandated by the Act of 2009, the great goodness of A2 milk etc. However, in stark contrast, there has been an insidious lethargy to address questions around the missing women and Dalits from the primarily male caste-exclusive sport of Jallikattu. I will attempt to wrestle with the former question, as I am unconvinced that my theoretical knowledge or experiences equip me to effectively address the latter. 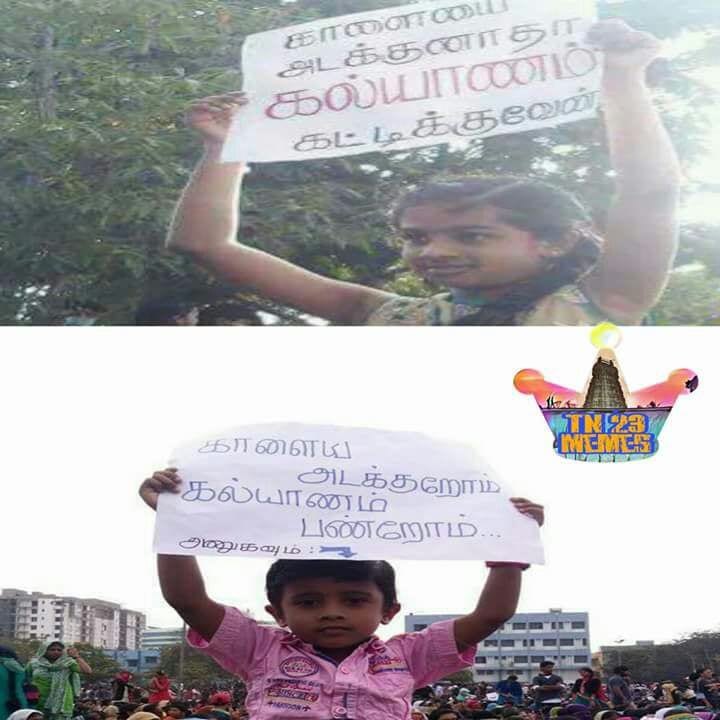 One only has to look as far as the language of the plaquards, speeches and the sloganeering on ground to detect the secondary status that the sport accords to women. Young girls are spotted carrying banners bearing slogans that reinforce passive femininity – “Kaalaiyai adakkunaatha, Kalyananam kattikkuven” (“Only if the bull is tamed, will I marry”) – and younger boys in turn carry posters sporting slogans that enhance their machismo and strips both women and bulls off all agency, in the same breath – “Kaalaiyai adakkurom, Kalyanam panrom” (“We shall tame the bull, we shall marry”). The symbolism of the imagery evoked is stark in its irony. Women calling upon men to evince their capacity to ‘subjugate’ another being, after years of women having been ‘subjugated’ at the hands of men, themselves. The imagery is further disturbing as it points to the ominous indoctrination of the unsuspecting present and future generations into a culture, which is in dire need – not of banning – but of critical self-reflection and transformation. Meanwhile, news narratives that huff and puff to highlight the ‘involvement’ of women in the primarily male sport of Jallikattu are essentialist to say the least, as they persist to unquestioningly recast women in the stereotypical mould of the domestic ‘nurturer’ whilst reinforcing men as alpha ‘conquerors’. Women nurture the bulls, just like women nurture the man, nurture his family, their children and then, if energy permits – themselves. Evidence suggests that a healthy percentage of the household budget (sometimes 4500 INR, sometimes more) is dedicated towards the maintenance of the stud bulls who are well nourished and cared for, which is more than can be said about the plight of too many women across the country whose health is barely budgeted for: by neither patriarchal state nor family.

The online public sphere is just as lopsided. Social Media is rampant with images of male icons conquering bulls accompanied by text that appeals to a narrow vision of #TamilPride: “Veeram engal thaai thantha thaalattu, maranam engal veera vilaiyaattu” (We derive valour from our mother’s lullaby, and death from the brave game). But, what happens if the bull conquers the man? (‘aanal, kaalai aalai adakkunaa?’) What happens if the man dies like Karupaiyya from Kalathipatti ? Were a man to die a hero, what becomes of his family? Does the legend of his virility or bravado serve as sufficient compensation for the family? Or does the demise of the primary wage-earner thrust additional burden on the woman of the household? These are all critical questions to raise – fundamental even, to the foundations of ‘Tamizh identity’ formation. Yet, we find that such questions have been tactically circumvented, lest they disrupt the ‘solidarity’ of the recent protests. Dalit scholars and activists who have formally highlighted the sport’s exclusionary designs have been written off by citing meagre instances of tokenistic participation. There is generous guilt being meted out to even the most cautious of critiques being offered on social media, which comes in the way of directly challenging this hegemonic hyperbole, which is fast spiralling out of control.

It is worrying that a staggering majority of the Tamizh public are geared towards reclamation without simultaneous introspection: a resolute regurgitation of history, of cultural practice, in the name of ‘conservation’. Let us take a moment to reflect. Why is it that we resist critique so? Does critical self-reflection diminish our collective identity or lend strength to it? In critically examining ourselves, do we diminish or in fact, resuscitate? Is not resuscitation essential to evolution – to retain relevance in, or correspond to a constantly changing context? In fact resuscitation, can be crucial for a culture to become more inclusive. Time and again we find that any critique posited on the identity debate has been indefinitely parked, and marginalised identities have been told to wait their turn. Until when will ‘being Tamizh’ mean usurping the experiences of multiple cross-cutting identities who constitute the state only to forge a singular myopic narrative?  If a movement fails to integrate the experiences of women, transgenders, Dalits and other marginalised groups interpellated by multiple subordinate-group identities – what kind of ‘solidarity’ is it really achieving? As long as ‘we’ conveniently unite against the external ‘other’ whilst simultaneously turning a blind eye to the ‘othering’ that ‘we’ perpetuate from within, than ‘we’ cannot sustain. Let us be the authors of our own critique, so that we can reflect and transform towards an intersectional, inclusive and sustainable Tamizh Identity.