“Growlithe! Growlithe!” I screamed, stopping my fellow walkemons who were ahead of me.

The Growlithe called out to me from that screen, waiting to be attacked with the pokeball.

Apparently, Kamala Nehru Ridge, around the Flagstaff house, house to British women and children during the 1857 mutiny war, was also home to some interesting Pokemons.

The game was on!

But not too long ago, posts like the one I’m writing and you are reading, gave me jitters.

“Who shoots down strange creatures on the road?” I thought.

But that was only till I discovered Pokemon Go on my Facebook feed. I was simply scrolling down Facebook and found someone mention Pokemon GO.

One post read – “I have just lost my bae to this game”.

Another one read “X must be running around the streets hunting pokemons.”

I couldn’t make any sense of it. A mobile phone and catching Pokemon? That doesn’t add up, does it?

Of course, Google to the rescue! Like always! Duh!

I immediately searched online and read about the game and found out that Pokemon Go is an Augmented reality game.

“Me wants!” I shrieked, startling my colleagues at Hidden-Pockets.

Just when I was getting excited about a game, I got a wake-up call.

Wake-up call: You live in India! Game not available bruh!

But then TOI decided to be nice and helped me get the APK link from where I could download the game for Android.

And then… And then.. And then…

Out in the open, out in the market appeared Rattata (a rat pokemon) on my phone. I couldn’t believe my eyes! That was it! There was no looking back!

In case, you are a newbie like I once was, here’s a quick low-down on how you could join the party too!

So basically, you hunt for Pokemons in the Pokestops. These Pokestops are located near you. With your GPS location, the game tell you about the Pokestops.

These Pokestops could be located in places which you are completely unaware of. Your chance to discover some Hidden Pockets that you’ve never explored before! 😉

As for me, I discovered temples, mosques, fountains and parks around me, thanks to PokemonGO. And that’s saying something considering that I can be spotted walking around, exploring new areas everyday. This game definitely helps  you know your city better! Voila, we at Hidden-Pockets try to do the same. We help you find pleasure pockets around you. And PokemonGo’s Pokestops are pockets in there own right.

After my first little adventure around the market, I got back home and created WalkemonGO, calling out to  gaming enthusiasts for a walk in North Campus.

When history meets the future!

I wanted to have more than just some fun. So I decided to set explore the past with some future. How about catching some Pokemons in the remains of the revolt of 1857? Sounds fascinating isn’t it?

The trail started from St. Stephen’s College, walking past to the Kamla Nehru Ridge, to the Ashoka Pillar via Hindu Rao Hospital.

We found a few more gamers who had never visited the ridge region and were all excited for the walk.

“The ridge might not have pokemons,” said one Walkemon during the trail.

“Well, let’s explore and find out!”

To our amazement the ridge had pokemons. We hunted atleast 8-10 of them through the entire trail. I even got a Level-up. How cool is that! 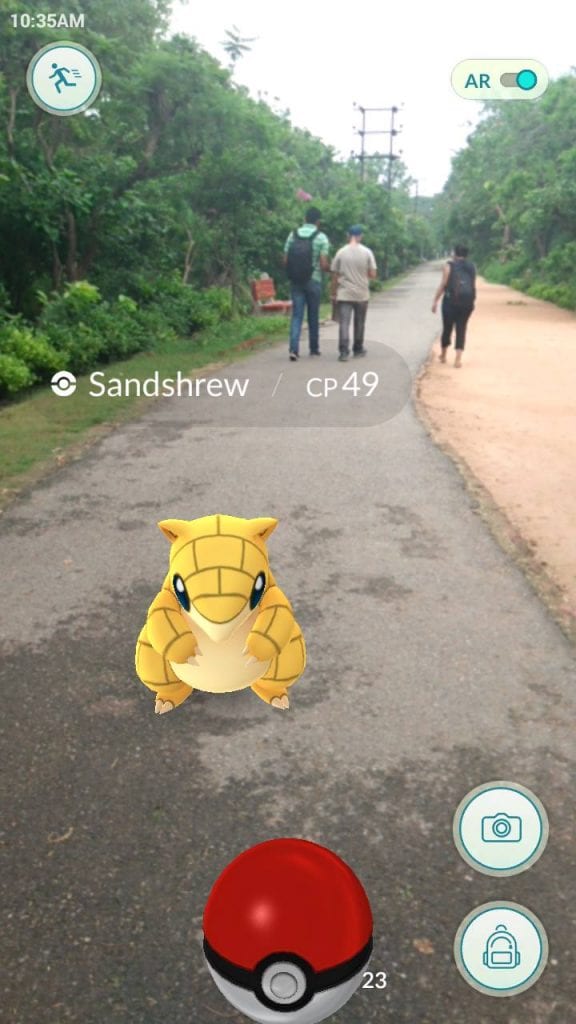 Contrary to the popular critic about games, this game forces you to come out of the closet, not really but definitely out of your homes! It’s a lot of physical exercise, you are happy and not thinking about work for a while! The walk was sheer relaxation for me! It was what a game must be.

Great weather, clean roads, loads of monkey! In short, it was an awesome gaming experience. And yes, monkeys! But monkeys are chill people they don’t disturb you if you don’t disturb them. So we learned to coexist after a point.

Article and Images by: Pallavi