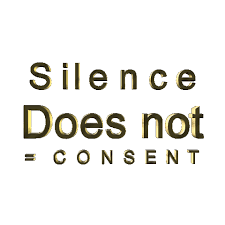 India is struggling to grasp the concept of consent. It may need more than just a little nudge to make people understand what consent means. Acknowledging the importance of consent to reduce and eventually prevent gender violence especially in relationships, Prajyna, a non-profit organisation working around gender related issues, is organizing its Men Talk Consent two-day workshop on April 29 and 30, 2017. The workshop will be addressing young men studying in colleges across Chennai. Dr. Sharada Srinivasan, Associate Professor and Canada Research Chair in Gender, Justice and Development, University of Guelph will be the facilitator of the workshop.

Consent is a conscious and unforced decision made by a woman to an offer to enter into a relationship or for sex with another human being, mostly men. It includes her decision to say Yes or No to invitations.

“Even if women doesn’t express a clear No or if they seem unsure or even confused in their exercise of consent, it still tantamount to a No and not a Yes from her”, explains Sudaroli Ramasamy, Programme Officer, Prajyna.

She elucidated on this point since a majority of Indian men take a woman’s hesitance or confusion or a lack of clear No as a Yes. 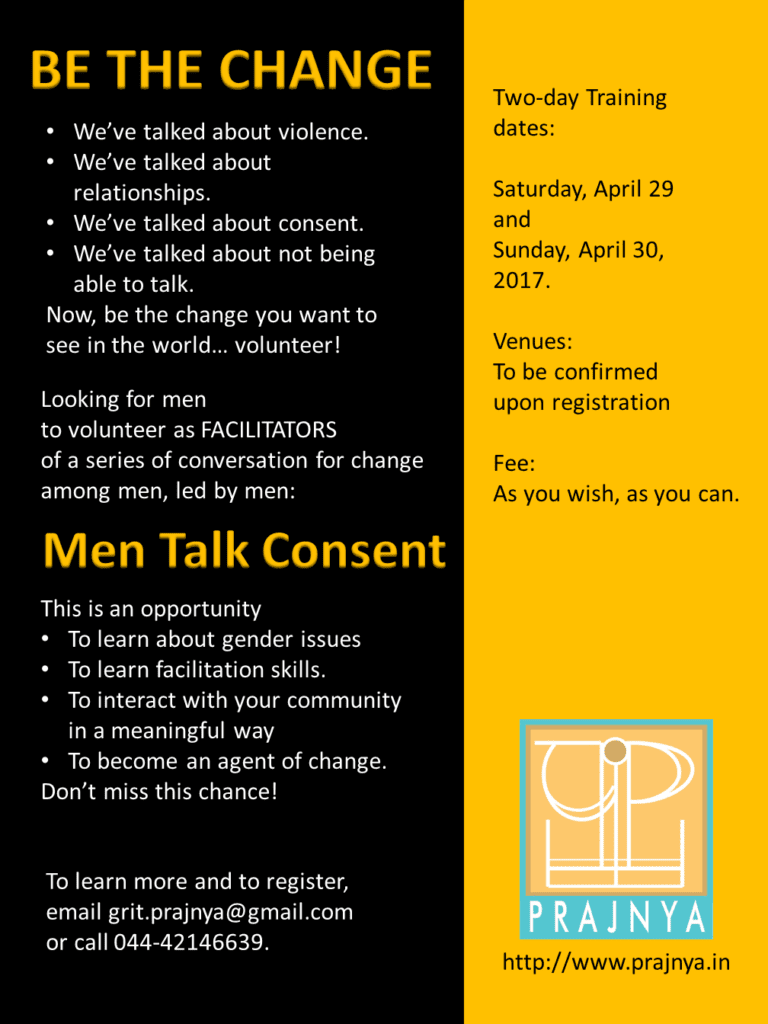 Dr. Sharada Srinivasan, who has been working in the area of gender for the last 25 years underlines the importance of conducting such a workshop:

“The discourse around gender focuses a lot on women but I don’t think we engage with men enough; and more importantly, I also think, we don’t know how to engage with men. So I think it is about time (to have workshops and similar spaces wherein) men have healthy conversations around ending violence against women, gender discrimination and other gender related issues.”

But why a ‘Men only’ workshop

Previously, Prajyna had done a series of workshops called Conversation about Consent involving college students: both men and women.

“If you want a group of women to talk about domestic violence and all of it, and  if you put a bunch of men there, there are certain things that the women are not going to talk about. It is about just creating that respectful comfortable space where they can have this conversation among themselves. We have had mixed group conversations and those conversations will only go so far.”

Srinivasan adds that it would be hard for women to think that they can do these sessions with men around.

“There are some no-go zones and I think it is best that men have these conversations among themselves. There is a certain idea associated with it in their minds. It is not the case with all. But if men talk about it, it will be that their own gender is talking about it and they will hear what the facilitator says. It is comfort zone for them to freely discuss things without any blocks.”

But what have been the problems with women addressing men about the issue of consent? Though Srinivasan emphasis on the lack of any problem or the need or lack for a safe space, she underlines the fact that we are not in a situation where men and women can sit down and talk about these issues yet. She points to the unintentional yet quick tendency to polarize: among men and women; as the reason for the need for gender-specific workshops male facilitators. In the case of men,it was largely found: this polarization often discourages many men from sharing their concerns and questions due to the stigma of being labeled as anti-women.

“This is exactly why it is good and important for men to think that gender related issues including gender violence is not solely a women’s problem and that men have a lot to address among themselves and these conversations need to happen a lot more.”

Hence Prajyna’s initiative in organizing ‘Men Talk Consent’ two-day workshop on April 29 and 30, 2017 between 10AM to 4PM.

Editor’s note: Any male college student can enrol for the workshop. Details regarding registration can be found in the poster above.