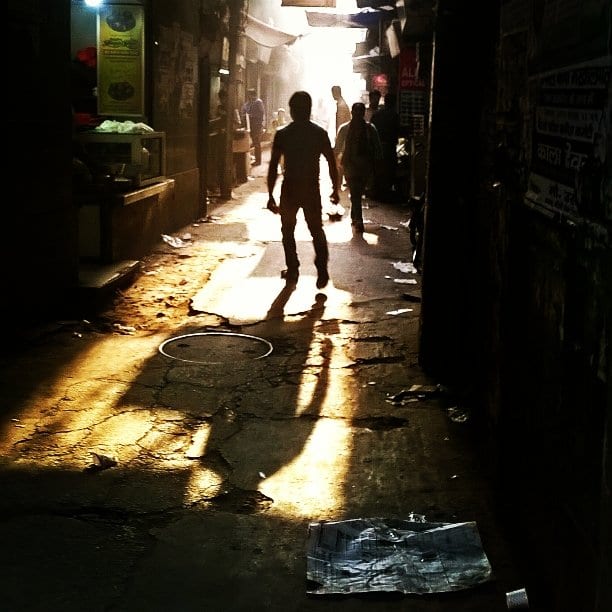 Every time I am heading to Dilli now, there is exhilaration in my belly, greed for the streets and skies of this city. Don’t get me wrong — I still hate it too, I hate how much I fear it and how much it makes me fear it, I hate the air thick with smog and the anger on strangers’ faces. Every trip outside is an experience fuelled by adrenalin, where I shed the comfort and peace of a bare air-conditioned room for the madness of Delhi’s streets, talk to strangers, get lost, eventually find my way. Perhaps Dilli for me is a metaphor for life: to go out there, to put myself out there, is terrifying and often overwhelming, it is difficult and it is work, but in the end it is always worth it. It transforms you. Delhi will never just be a city for me: it will be a reminder to let go of my fears. Or perhaps Delhi has transformed all cities for me, has made them somehow approachable, has let me see the magic in encountering places and people as if I were a traveller, has shown me that I will always find places and people that value the same things that I do.

Delhi is a strange, strange experience: it lives in so many different times at once — the metro ride from Chandni Chowk to CP or Hauz Khas takes place in terms of years, not kilometres. Yet instead of being confusing or conflicting (which Delhi often is), this aspect of Delhi gives me hope, makes me feel as though I am a part of something larger than myself. And also: that this too will pass, and will remain. The old and the new lock horns and carry on, struggling with each other, but aware that this battle has no end. Delhi (like all of India, perhaps) is amused at our efforts to remain enclosed in bubbles, separate from all the people around us, but it will not let us have it. So many worlds, in terms of time and wealth and age and ideas, so many bubbles interact in Delhi on a daily basis. I am convinced this interaction is important, is vital, is transformative: you must meet what is different from you, and respect it. You must cease to fear it. A love letter to Delhi is the same as a love letter to life: Kipling said that Delhi was the naval of the world, and it feels like that to me — for me, it is, because I have made it so. Cities seem less scary, and strangers don’t seem so threatening. At the very least, it seems possible — travel, and discovery, and all the rest of it.

Despite everything, Delhi is sometimes constricting, violent, and petty. But I love it like family, like somebody who has seen through its layers and is convinced that at the heart of it, the city is only vast and inclusive and has space for everybody, makes space for everybody. The metro was, to me, a revelation, a space that made me interact with all the men and women that I would otherwise ignore on a street — it let me observe a cross-section of all the people who live here, and told me that I too was a part of this heaving mass, no matter what I wore or thought or said today — I belong here. No matter which godforsaken corner of Dilli I may land up in, a metro station is a few minutes away, and that makes me feel safe and free, like I have some control over time and space in this capital. That I belong here too. It’s what I’ve always felt when I’ve encountered Delhi’s various monuments that are open to the public, when I’ve been able to spend hours under swaying trees without having to answer any questions. That’s what I felt one sunny afternoon in Paharganj, where I was secretly terrified and lost with a friend, but a series of shopkeepers, rickshaw-wallahs, and strangers on scooters guided us to the bookstore we were looking for. I belong here, there is value in what I love, I belong here. I must move out of my comfort zone to be a part of this magic, I must be kind and brave, I must be persistent with this mad city, but at the heart of it, it loves me. I belong here.